Each year, Tulane University pulls out all the stops to celebrate the graduating class with pomp, circumstance and a healthy dose of New Orleans flair. This year proved no different as 2017 commencement speaker, Dame Helen Mirren, wowed those in the Mercedes-Benz Superdome with her words of wisdom, and music punctuated every aspect of the ceremony. 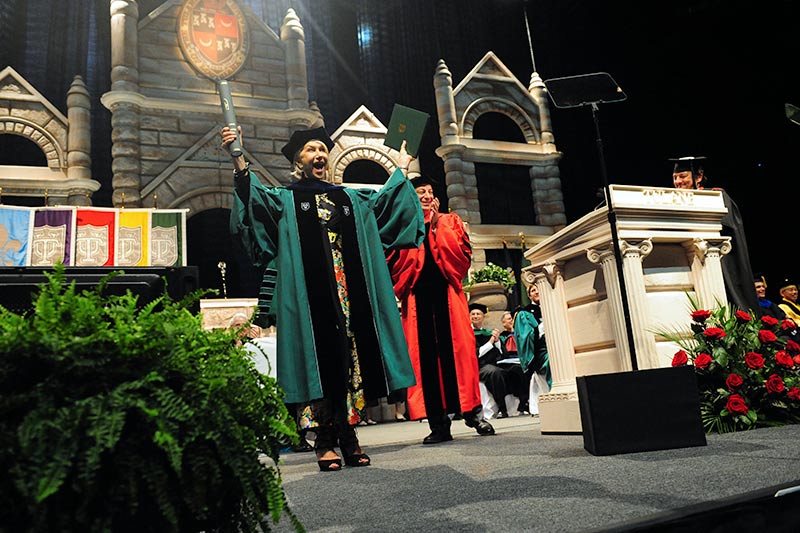 Helen Mirren reacts to receiving an honorary degree during the 2017 Tulane Unified Commencement Ceremony on May 20., Graduates wait backstage for their moment in the spotlight before the start of the ceremony., Members of Dr. Michael White’s Original Liberty Jazz Band play as graduates process to their seats in the Mercedes-Benz Superdome., Tulane President Mike Fitts addresses the Class of 2017. , An academic hood is bestowed on Branford Marsalis during the ceremony when he receives an honorary Tulane degree., Helen Mirren congratulates fellow honorary degree recipient Branford Marsalis. Also seated on the stage (left to right) are other honorary degree recipients Shelley Taylor and Diane Nash and Branford’s father, Ellis Marsalis. , Yolanda Windsay, who received a Master of Liberal Arts degree, sings “Do You Know What It Means to Miss New Orleans” with her mother, Topsy Chapman. , Graduates celebrate as confetti falls, marking the end of the commencement ceremony.