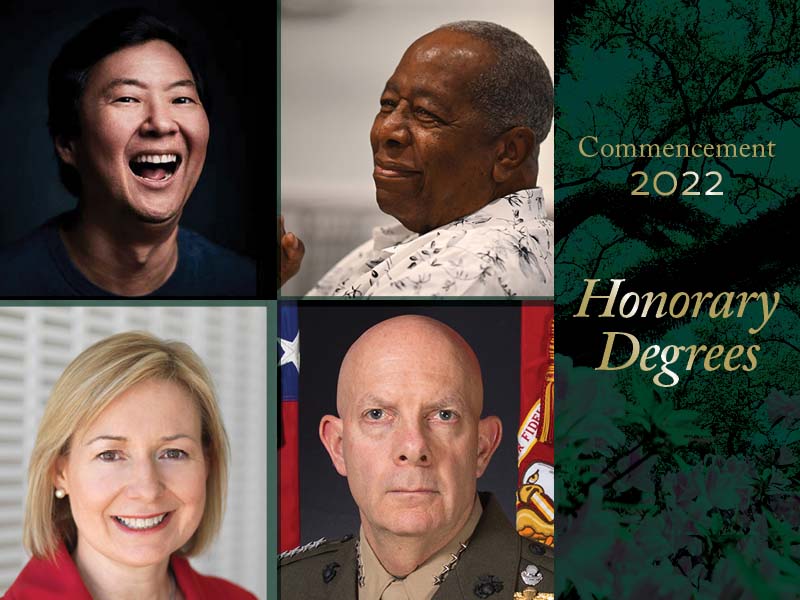 Four individuals who have made major contributions in fields ranging from sports and entertainment to national defense and artificial intelligence will receive honorary degrees at Tulane University’s 2022 Commencement.

Henry “Hank” Aaron, one of baseball’s greatest players; Gen. David H. Berger, a Tulane graduate and commandant of the United States Marine Corps; Ken Jeong, a medical doctor who became one of the country’s most sought-after comedic actors and Dr. Rosalind Picard, an inventor, engineer, scientist and pioneer in artificial intelligence, will receive honorary degrees at the May 21 ceremony. Aaron will receive Tulane’s first-ever posthumous honorary degree.

“Each of these individuals has attained the highest achievements in their respective fields while enriching, empowering, entertaining and protecting the lives of others,” Tulane President Michael A. Fitts said. “They truly personify and epitomize Tulane’s values of excellence, innovation, compassion and service. It gives me great pleasure to recognize them during this special ceremony.”

“Each of these individuals has attained the highest achievements in their respective fields while enriching, empowering, entertaining and protecting the lives of others.”

Aaron, the greatest home run hitter of all time, was elected to Baseball’s Hall of Fame in 1982. He rewrote baseball's record book during his 23-year Major League career (1954-76). When he retired at the end of the 1976 season, Aaron held more batting records than any other player in the game’s history. Aaron’s most famous home run came in Atlanta on April 8, 1974, when he hit his 715th homer, breaking Babe Ruth’s seemingly untouchable record. From December 1989 until his death in 2021, he served as senior vice president for the Atlanta Braves.

Aaron was honored for his lifetime achievements both as a player and humanitarian. President Bill Clinton awarded him the Presidential Citizens Medal and President George W. Bush awarded him the Presidential Medal of Freedom for his humanitarian efforts. Then Commissioner of Baseball Bud Selig created the Hank Aaron Award in 1999, which is presented annually to the best hitters in the National and American leagues.

Aaron was scheduled to receive an honorary Doctor of Humane Letters at Tulane’s 2020 ceremony, but that commencement was postponed due to COVID-19. At this year’s ceremony, television host and nonprofit executive Billye Aaron will accept the honorary degree on behalf of Aaron. Billye Aaron, who was married to the baseball great for 48 years, became the first Black woman in the southeast to co-host a daily, hour-long television talk show. She was also a leader in numerous organizations, including the UNCF and the NAACP, where she is director emeritus of its Legal Defense Fund.

A native of Woodbine, Maryland, Berger assumed the duties of commandant of the Marine Corps in 2019. He graduated from Tulane University, where he was a member of Tulane’s Naval Reserve Officers’ Training Corps and was commissioned as an officer in 1981. Berger has commanded at every level – including leading a Reconnaissance Company; 3rd Battalion, 8th Marines in Haiti during Operation Secure Tomorrow and a Regimental Combat Team 8 in Fallujah, Iraq, during Operation Iraqi Freedom.

Jeong, who will also deliver the keynote address at the commencement ceremony, honed his skills in New Orleans’ comedy clubs while doing research at Tulane's School of Medicine in the 1990s. Legions of fans know Jeong as Mr. Chow from The Hangover franchise, Señor Chang from the critically acclaimed television show "Community," Wye Mun Goh from the blockbuster film Crazy Rich Asians, and from his own Netflix standup special "You Complete Me, Ho," which earned him a People’s Choice nomination. He is currently a panelist on the Emmy-nominated "The Masked Singer" now in its seventh season and has just wrapped his second season as host and executive producer of the popular "I Can See Your Voice."

Jeong earned his undergraduate degree from Duke University (from which he also received an honorary degree in Humane Letters) and his MD from the University of North Carolina. He also did research in gastroenterology at Tulane University School of Medicine and completed his internal medicine residency at Ochsner Medical Center, while performing stand-up comedy in New Orleans clubs. Jeong will receive an honorary Doctor of Humane Letters.

Dr. Picard is the author of the book, Affective Computing, recognized internationally as launching the field of affective computing, which includes giving machines the ability of emotional intelligence and simulated empathy. Picard is a highly cited author with over 350 peer-reviewed articles in digital health, machine learning, wearable technology and affective computing.

Picard co-founded two companies that commercialized her inventions: Empatica, which provided the first smartwatch validated by the FDA for monitoring seizures, and Affectiva (now part of Smart Eye), whose mission is to humanize technology. The inventions of Picard and her team are now used globally. She is a full professor at MIT where she teaches and directs research at the Media Lab and is the founding faculty chair for MindHandHeart, MIT’s campus-wide wellbeing initiative. Picard will receive an honorary Doctor of Science.

Tulane University’s Commencement 2022 will take place at 9 a.m. on May 21 at Yulman Stadium on the university’s uptown campus. It will include all the pomp and circumstance of a traditional graduation ceremony with a New Orleans flavor, including live jazz and a second-line procession.