Music, celebrities and more will help Tulane virtually celebrate the conferral of degrees 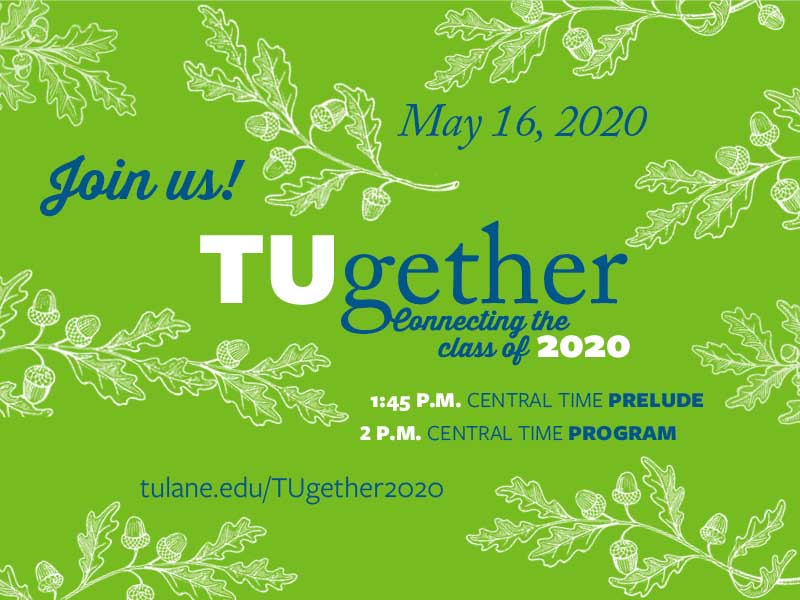 Tulane University’s annual commencement, a storied celebration that blends legendary New Orleans musical performances with internationally known keynote speakers, has been postponed due to COVID-19 restrictions. But the university will recognize the academic achievements of its 2020 graduates virtually on Saturday, May 16 – the original date of this year’s commencement.

Graduates, their families, friends, faculty and the entire Tulane community are invited to "TUgether – Connecting the Class of 2020,” an online live stream celebration of scholastic success, as well as Tulane pride and unity. The event will take place at tulane.edu/TUgether2020, beginning at 1:45 p.m.

This uniquely Tulane-style salute will feature remarks by President Michael Fitts and select student speakers, along with special appearances by top celebrity guests from the entertainment, athletic and business worlds. Dr. Michael White’s Original Liberty Jazz Band and Topsy Chapman will serenade graduates with musical performances throughout the event, which will conclude with the conferral of degrees by President Fitts.

“While we still plan to have an on-ground commencement at some point with all the pomp, circumstance and second-lining graduates have come to expect, we wanted to honor the extraordinary Class of 2020 on what would have been their commencement day,” Fitts said. “A class this great deserves all the recognition and accolades we can give them. They have all demonstrated amazing grit and determination in completing their studies in the midst of a pandemic and worldwide disruption to every aspect of our society. This perseverance, adaptability and courage will serve them well in their future careers and lives.”

Tulane has also asked graduates to film themselves celebrating with their families and send the footage to the university, so it can be shared as a video post on social media following the conclusion of Saturday’s event. Some videos received beforehand will be featured during Saturday’s celebration.